Time to get out the Winter boots!! 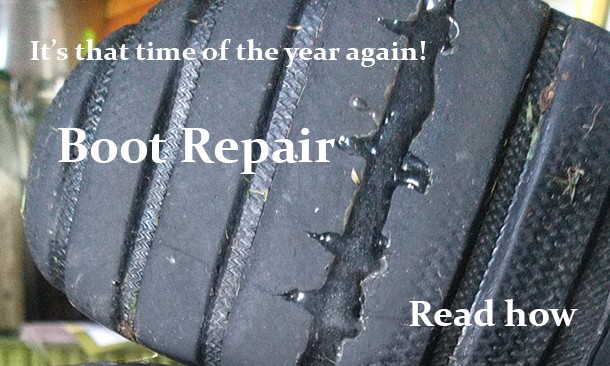 Some how I seem to do this every year!

Autumn is here and Winter will not be far around the corner so it is time to get out my winter boots. Towards the end of last Winter or the beginning of Spring I noticed that my boots were suffering from a little wear and tear (both my wellington boots and more heavy duty walking boots). But as the weather started warming up a bit I didn’t really give much thought to getting them repaired as you wouldn’t be needing them for a while. So I just put them in the cupboard and thought I’ll get round to them when I need them again. But, of course life happens and I never did!

The colder weather has crept up on us and I need my snug waterproof boots again, now because sometimes the British weather can be apocalyptic at times for no apparent reason or without warning. I take a good look at my boots and prey they are not as bad as I think but realise that they need repairing. They are no longer waterproof and have splits in the rubber, thorn holes in the soles and even a crack across one of the soles. These simply will not be good enough and be of no use if I’m walking through puddles. They were expensive when I bought them last year and can’t believe they haven’t lasted very well. I can’t really afford to buy new ones, not with Christmas round the corner and wandered if there was anything out there I could use to try and fix them or at least make them waterproof again so they are of some use. I have definitely not budgeted for a new pair of boots this year but if I can find something that would cost a tenner or less then I would give that a go.

After a quick internet search I came across Stormsure. Who are Stormsure? They seem like a genuine company and supply a whole range of repair solutions. They are a British company based in Cambridge. This looked promising. I looked around the site and watched a few videos they have and also a handy repair book section. What was great is that the product I needed was less than tenner and that is with shipping included.

I still wasn’t convinced and didn’t really know how to exactly execute the repair I needed to do so I decided to contact Stormsure to see if they could help. It is very easy to contact Stormsure either via a contact form on the website, a direct email address and a telephone number to speak to someone. I used the contact form on the website and was so brilliantly surprised with the response I got and the very same day! I got a reply form Stuart with some great advice which I’ll explain a bit more later on. He even edited the picture I sent in to show where I should make some grooves to add structure. The advice given was way above and beyond the help and support you normally get from companies so I decided to purchase the Black Boot, Shoe & wader Repair Kit.

I received delivery of the repair kit the very next day. Incredible efficient service! So now I am ready to try my repair. I followed Stuart’s advice and one thing he mentioned was about spending time with the preparation. I put on 1 layer which set into the boot (level dropped while setting) and then after 12 hours added another layer, then a third. I did think that the Stormsure adhesive could work for other splits in boots or wellies but genuinely didn't believe it could work on the sole (which moves a lot when walking). Yet it worked really well! I have been wading in streams and walking up some boggy terrain in them and my feet are dry (now). Really impressive. Thank you Stuart especially for the advice and amazing product!

The exact email I received from Stuart is below with the pictures I send him and the one he sent back are below.

“Hi, Essentially yes, It would be best fill the gap as much as you can with the glue. Even with it spilling over the top and edges a bit. In these situations sometimes it is even better to cut grooves in the opposite direction to the split going into both sides of the boots. (I have attached a picture). Then filling these grooves as well with the glue making sure the glue fills all the gaps and grooves. This gives extra coverage for the glue to hold and also the glue into both sides of the split. This gives extra strength to the repair. Obviously only if you can.

It should be strong enough not putting etc grooves in but as it is in the area that bends a lot any extra strength will help.

Also try and make sure the sole is clean and dry before application. Time spent with preparation is key here for the best results.

I hope this helps.”

As I was so amazed by the result, and extremely proud of myself for doing it which also saving me loads of money. I contacted Stormsure to show them how I had done. I got an immediate response from Stuart with congratulations and also some further advice for the future. Here is what he said,

“Hi, That’s amazing news ???? The time spent in preparation is definitely worth while! So glad it has worked so well (we knew it would if applied correctly).

What you may find going forward in the future is that other areas of the boot / sole may show signs of weaknesses. What has happened here is that the weakness in the sole originally caused the sole to split but the stress will now move to another area of the boot/sole now that that original area has been reinforced. So I wouldn’t be surprised if other cracks start to appear in different areas. Yes, the glue is much much stronger than the compound of the sole. The glue can also be used to continuously repair the sole and in some extreme cases that we have done before, is to actually build a brand new sole out of the glue. If the sole has completely eroded. This works great also.”

The follow up support has been just as good and will definitely be using Stormsure the company and Stormsure glue again with lots of other things.

Thanks again for all your help! 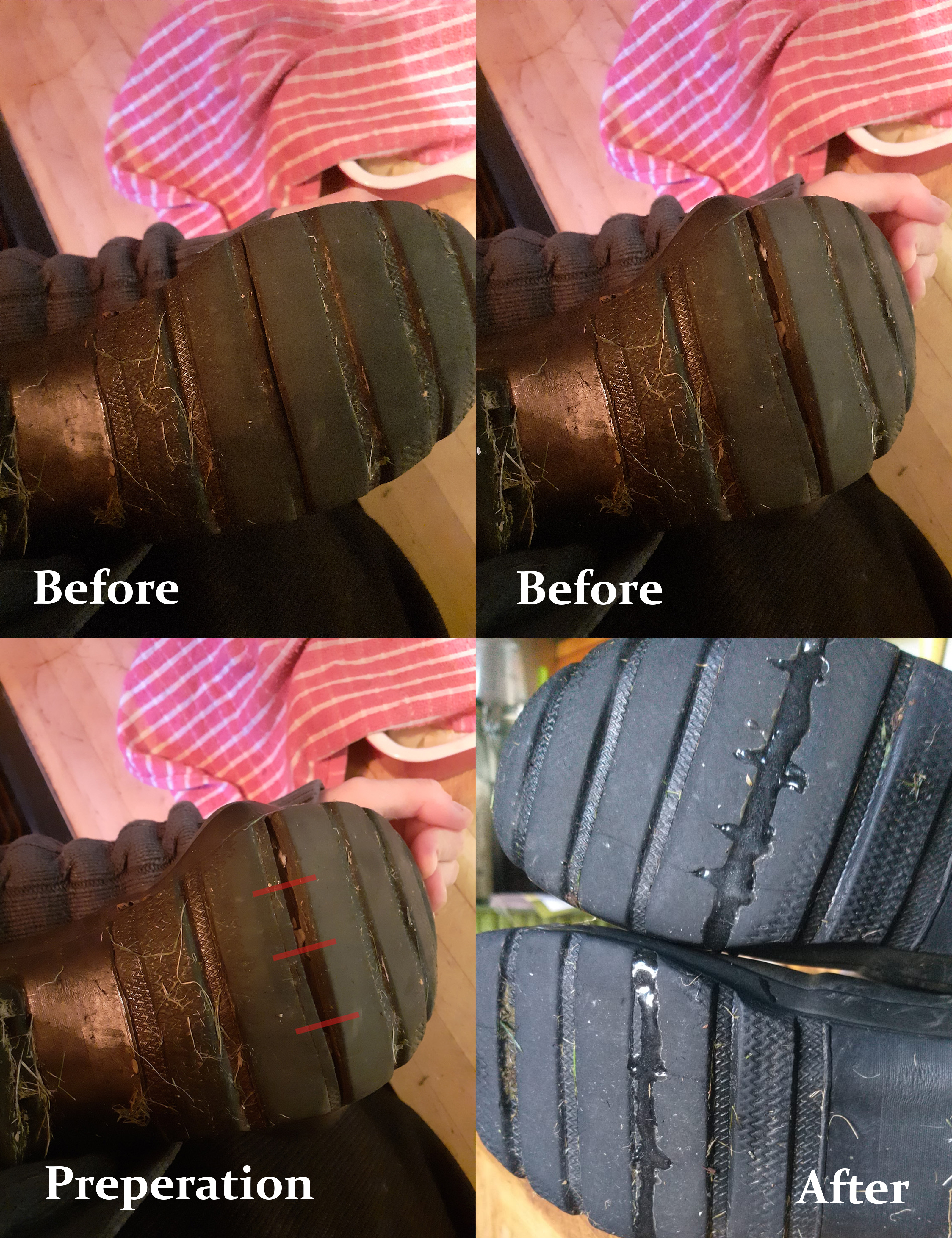 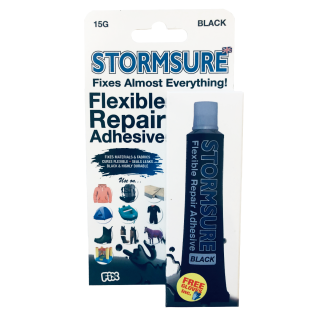 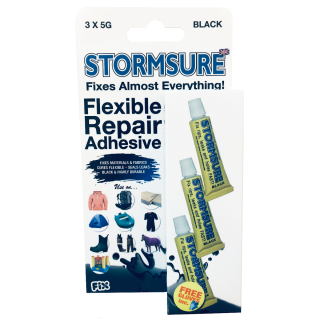 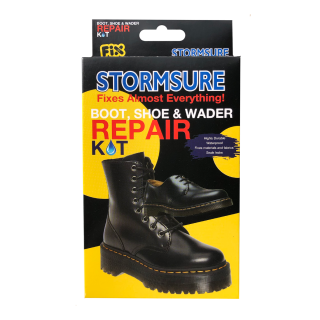 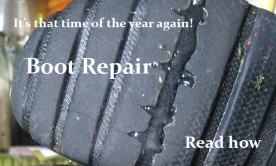 Time to get out the Winter boots!!

Sell Stormsure as your own? Partner with us 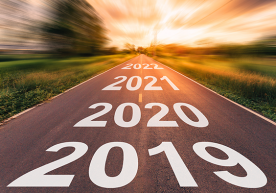